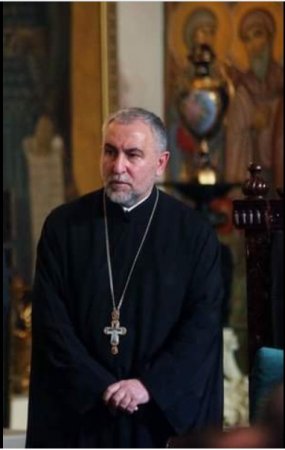 Giorgi Zviadadze, Rector of Tbilisi Theological Academy and Seminary, has been the priest of the Church of Georgia since 1996; he was ordained by the Catholicos-Patriarch of All Georgia, His Holiness and Beatitude Ilia II. He served at Saint George of Lomisa Church in the Gldani District, Sioni Cathedral Temple of Tbilisi and, subsequently, with the blessing of the Catholicos-Patriarch of All Georgia, His Holiness and Beatitude Ilia II, he was appointed Dean of Kashveti Church of Saint George. In 2008, Archpriest Giorgi Zviadadze was ordained Protopresbyter and appointed as Dean of Tbilisi Sioni Cathedral Temple of the Dormition of the Mother of God.
For his devoted work in the bosom of the Orthodox Church, Protopresbyter Giorgi Zviadadze has been entitled to wear an embellished Cross and mitre. He has been rewarded with the highest reward of the Orthodox Church of Georgia – Order of Saint George; also, he was awarded the orders of the Churches of Antioch, Jerusalem, Greece, Czech Republic and Slovenia.
Protopresbyter Giorgi was Dean of Tbilisi Theological Seminary, later the Dean of the Theological Faculty of the Academy, Vice-Rector and since 2009 up to date, he has been Rector of Tbilisi Theological Academy and Seminary.
Protopresbyter Giorgi Zviadadze is PhD in Philology and Theology. He has graduated from Ilia Chavchavadze University of Foreign Languages, the Faculty of the English Language, and the Highest Courses of Simultaneous Interpreting where he qualified as an interpreter and translator, has acquired the Master’s Degree of the School of Politics and International Relationships of the University of Georgia.
Protopresbyter Giorgi Zviadadze was Director of the Charity Fund working under the aegis of the Patriarchate of Georgia “Lazare”, Executive Secretary of the Charity Fund of the Patriarch of All Georgia “Revival and Development of Spirituality, Science and Culture”. He conducted the work of the Department of Theology of the Society of History of Science founded under the aegis of the Academy of Sciences of Georgia, with the blessing of His Holiness and Beatitude Ilia II, Catholicos-Patriarch of All Georgia, he also was the member of the educational-methodological Council of the History of Religion of the Ministry of Education as the representative of the Patriarchate of Georgia.
Up to the present, Protopresbyter Giorgi Zviadadze has worked as the member of the Theological Commission established at the Patriarchate of Georgia and as the member of the Joint International Commission of Theological Dialogue Between the Orthodox Church and the Anglican Church. He participates in various international forums and assemblies held in different countries and is the author of many theological and scientific works.
Please scroll down for the full biography.