The History of Tbilisi Theological Academy and Seminary 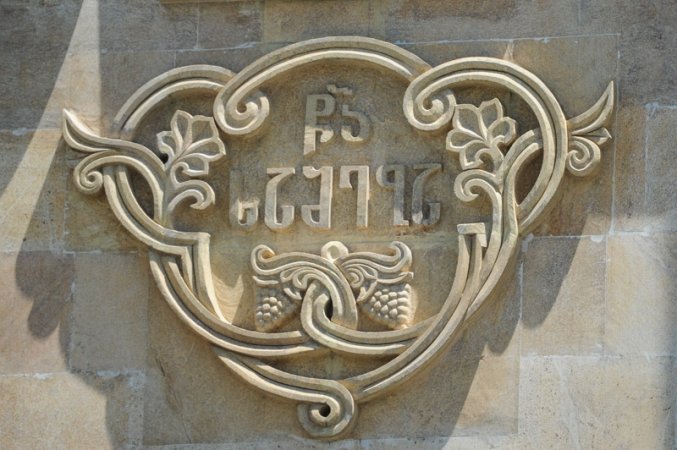 Historic past of Tbilisi Theological Academy -   church enlightment in Tbilisi Theological Academy and Seminary , in the form of  book-making centers and academies merged with Georgian monasteries located both in Georgia or scattered abroad is based on the  lifelong tradition. The raise of enlightment among the monks was the book-making activity ongoing in the seriptoriums of monasteries, particularly in translations from foreign languages, copying, multiplying and creating original works,that was a successive and interconnected process.
Theological enlightment centers existing in Georgia and beyond its boundaries (IV-XVIII cc) played a decisive part in the history of the Georgian Christian culture.First of all, one should mention the Holy Lavra of Saint Sabas the Sanktified functioning in Palestine, where the Georgians had their own church in possession and the book-making activity was carried out on a large scales. It was the very place where the language reform had been carried out  (from Hanmetian to  Heametobian) -The following outstanding church  figures were active at work  in Lavra : St. Ilarion Kartveli (IX c), the great Liturgist John Zosime (X c), the founder of the Holy Cross Monastery Gregory Proehoros (X-XI cc).
Beginning from the IX c, a great number of Georgian centers were established in Byzantine, the were: Constantinople; Olympus (Ulimbo) Romana, Cyprus, Mount Athos, Petritsoni…  In the presented list, which  is not complete, only the sites where great Georgian  church figures were active  at work, had been mentioned. Constantinople had become the greatest educational center for the Georgians. The Worthy Arsen of Iqalto and John Petritsi, Ilarion Kartveli and many other church figures. Athanasis of Athos had established the first big monastery on Mount Athos in 963. Georgian monks- it rerants also participated in the  functioning of the above mentioned Lavra. In the years (980-983), The Iberian monastery was founded  specially for the Georgians (Iberon). Thanks to the profound work of John Mtatsmindeli and Saint John Tornikipos (Tornike Eristavi). The activities  started by John were  continued by his son, the great luminary of the church, St. Eqvtime  Mtatsmindeli  (about 955-1028) who  established a theological school in Athos St. Gregory Mtastsmindeli was one of the spiritual Fathers of the above mentioned abode (1009-1065): like Eqvtime  of Athos he had rendered a  priceless service to the  development and enrichment  of the Old Georgian writing. Petritsoni Monastery was established by  Gregory  Tauel, Eristavt Eristavi, Bakurianisdze in Bulgary, in 1083. He himself prepared a typicon  (monastic regulations) for the  monastery in Georgian and Greek. A Georgian Seminary founded within the monastery.  Gelati  Academy was founded at the beginning of the XII c, under the King of the United Georgia David the  Builder, the church was founded within the Gelati Monastery where the teaching process was carried out according to the  educational system of middle ages –trivium - quadrum ( rhetories, grammar, philosophy together with dialectics, mathematics, geometry, music ,astronomy), to which theology was also attached. Iqalto Academy - the importance of Iqalto monastery established in the VI c by the pupil and follower of John of  Zedazeni , St. Zenon  significantly grew as they suppose after establishing the Higher Educational Institution in the  second half of the XII c. the Academy  famous  thanks to the  profound efforts  of the  well-known  Georgian Church figure, a scientist and  theologian St. Arsen of Iqalto who had received his education in Constantinople. It seems that in Iqalto Academy the process of teaching was based on the same principle as in Gelati. Besides the academies, educational institutions were also opened within the Monasteries of Shiomgvime, David Gareja, Opiza, Oshk, Shatberdi, Berta, Handzta.
Tbilisi Theological Seminary – Tbilisi Theological Seminary was established  in 1755 by  Blessing of His Holiness and Beatitude, Catholicos  Patriarch of All Georgia, Anton I . Its first Rector was Philipe Khaitmazashvili.
The  following subjects were taught at the seminary: (grammar, piitics,Arts,retorics,logics, categories of the old scholastic Aristotel, metaphysics,physics,morality.At the same time, a theological institution was opened in Telavi  in 1758,on the basis of which a  theological seminary was founded in 1782. Its first Rector was  Archmandrite  Gaioz.  After the abolishion of the Georgian Orthodox Church  Autocephaly  the Georgian theological institutions stopped  functioning. Tbilisi Theological Academy and Seminary – by blessing of His Holiness and Beatitude  Catholicos – Patriarch of all Georgia  Eprem II. Pastoral courses were founded in the town of Mtskheta on October 14, 1963 that were transformed into Theological Seminary  in 1965. The Rector of the above mentioned  institution  up to 1972 was  His Holiness and Beatitude Ilia II at that time before 1967, The Bishop of Batumi-Shemokmedi, from 1972 – the Bishop of Tskhum-Abkhazeti, later on, from 1969- metropolitan, but from 1977- Catholocos-Patriarch of all Georgia  and  simultaneously the metropolitan  of Tskhum-Abkhazeti  by whose  blessing  Tbilisi Theological Academy was established in 1988 ( it was joined by the Seminary)  It  should be pointed out that thanks to the Patriarch’s  profound works of His Holiness  Patriarch Ilia II, the church of  Constantinople  acknowledged  autocepaly of the Orthodox Church of Georgia in 1990. Thus fact promoted the church education in Georgia; in 1993, a Theological Institute comprising two faculties of Christian Anthropology and Christian Art History and Theory were founded within the Theological Academy. In 2005 the faculties of Church Architecture, Icon Painting, Restoration of easel and Monumental  Icon Painting were opened. In 2006, an Institute of Decorating Gardening and Ecology and a High School of Church Singing and Hymn Study were also established. An unprecedented event took place in 2013, as a result of profound work and efforts , His Holiness and Beatitude Catholicos  Patriarch of All Georgia  Ilia II, a Dissertation Board was formed in Tbilisi Theological Academy and Seminary that is  authorized to award an academic degree of Doctor of Theological (by order N47,29.03.2013); the highest third cycle was founded – Doctorate program with the further scientific trends:  Patrology, Dogmatics, Church History,Bibliestics, Liturgics and Canonical Law. The teaching process on all the three levels is free.