A Seminar Related to European and Euro-Atlantic Integration Issues 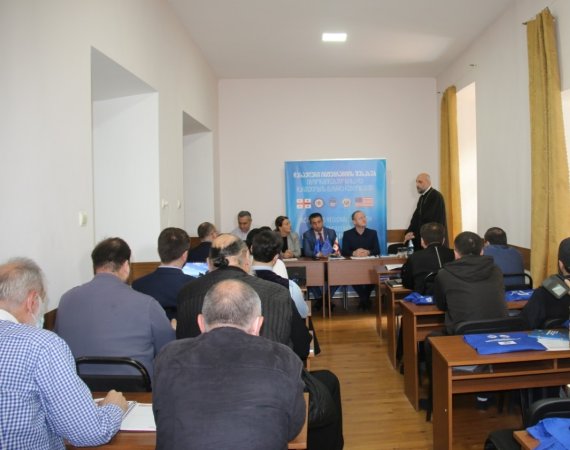 Within the framework of the project funded by the State Department of the United States, a seminar was organized at Tbilisi Theological Academy and Seminary. The seminar spanned three days of sessions, which were held on October 7, 11 and 17 of the current year. The topic of the discussion was the European and Euro-Atlantic integration of Georgia.

It should be noted that the series of seminars is a joint project of the Information Center on NATO and the European Union working under the aegis of the Ministry of Foreign Affairs and the Union “21st Century”. Within the framework of the project, in order to raise public awareness on the issues of European and Euro-Atlantic integration, informational meetings were planned in the dioceses of the Georgian Orthodox Church and theological higher educational institutions.

The work of the seminar was opened by the Vice-Rector of Tbilisi Theological Academy and Seminary, Archpriest Besarion Tsintsadze and the Deputy Director of the NATO and EU Information Center Irina Shamiladze. Irina Barnabishvili, Head of the Regional Relations Service of the Information Center on NATO and the European Union, participated in it.

Within the framework of the three-day seminar, Zurab Khamashuridze, Director of the European Integration Department of the General Directorate of European Integration of the Ministry of Foreign Affairs of Georgia, and David Bujiashvili, Director of the Sectoral Integration Department of the same agency, spoke about Georgia’s European integration process, its importance and prospects. Attention was drawn to the analysis of the issues related to the existence of a European perspective for Georgia and the necessary actions to obtain the status of a candidate country.

The Director of the Department of Security Policy and Euro-Atlantic Integration of the Ministry of Foreign Affairs Tornike Parulava and Advisor to the Head of the Department of Defense Affairs of the National Security Council of Georgia Natia Gvenetadze spoke about the dynamics of NATO-Georgia relations, mechanisms of cooperation and existing challenges.

Paata Gachechiladze, Chairman of the Board of the Union “21st Century”, discussed the State-Church systems in the EU member states, the existing relations between the state and the Church, and the existing models of the Orthodox Church in several EU countries.

The seminar was held within the framework of the project – “Increasing Awareness and Involvement in Western Integration” - funded by the State Department of the United States and was jointly held by the NATO and EU Information Center of the Ministry of Foreign Affairs and the United States Embassy in Georgia.

The meeting worked in a warm and friendly atmosphere and ended with an interesting discussion.