Defense of a Master’s Degree Thesis 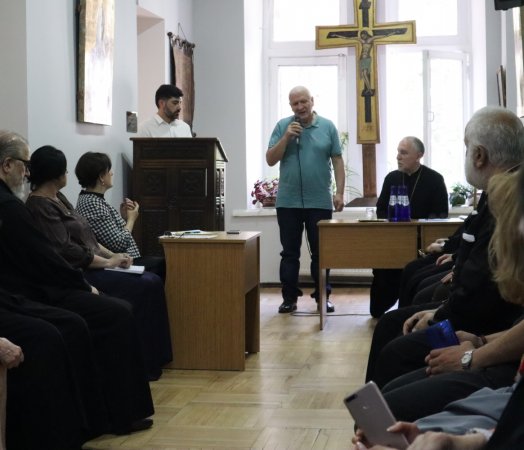 Day I
On July 1, 2022, Giga Dzamukashvili, a student of the Faculty of Ecclesiastical Law, involved in the Master’s program of Theology, defended his thesis on the topic – “Implementation of Ecclesiastical Justice in the Orthodox Church”. The Supervisor of the thesis was Doctor of Theology, Professor, Archpriest Alexi Kshutashvili, and the Reviewer - Doctor of Theology Giorgi Andriadze.
The defense session was presided over by the Rector of TTAS, Protopresbyter Giorgi Zviadadze.

Giga Dzamukashvili presented his Master’s thesis to the audience, spoke about its structure and content. The objective of the thesis was to study and outline the basic norms of the Ecclesiastical Law, teachings rooted in the bosom of the Church, Church traditions, based on which the nature of justice within the Church is determined. “It extends to the fact that the bodies of justice in the Church were formed directly on the basis of the powers given to the apostles by Christ” - he noted. The student extensively reviewed the three instances of ecclesiastical court - episcopal, metropolitan and patriarchal courts. He spoke about matters subject to ecclesiastical justice and jurisdiction, about the grounds for bringing the case and the persons, who can be accusers, about the importance of bearing the burden of verification during the substantive consideration of the case. He also spoke about the passing of judgment and appealing a verdict, the importance of remorse when a sentence is being executed, and more.

In his closing speech, the scientific supervisor of the master’s degree student, Doctor of Theology, Professor, Archpriest Alexi Kshutashvili spoke about the merits of the work and the novelty it contains. He noted that the Master’s degree student, along with other sources, used monuments of ancient Georgian Law, which is a rare phenomenon in the field of research done on Ecclesiastical Justice. In addition, he noted that the attempt to systematize the studies suggested by the master’s program student and the laws related to the discussed issues and to understand them in a unified context is also a novelty.

The reviewer, Doctor of Theology, Giorgi Andriadze, emphasized the actuality of the work and the high scientific level of performance. He expressed significant opinions, suggested notes, the consideration of which would make the work even more complete.
After the public reading of the review, a discussion took place. Giga Dzamukashvili answered the questions interestingly and exhaustively.
Protopresbyter Giorgi Zviadadze, Rector of TTAS, evaluated the work and gave interesting advice, opinions and remarks about it. Doctor of Philological Sciences and Theology, Professor Edisher Chelidze noted that it would be better to replace the presbyter mentioned in the work with its Georgian equivalent - priest/elder, and the informer - with the complainant.

Master’s degree thesis was evaluated and important opinions were expressed by Doctor of History and Theology, Professor Sergo Vardosanidze, Doctor of Philology, Professor Gvantsa Koplatadze.
The work aroused great interest and got approval from the members of the commission and the attending public. According to the joint decision of the commission members, Giga Dzamukashvili’s thesis “Implementation of Ecclesiastical Justice in the Orthodox Church” received the highest grade and Giga Dzamukashvili was awarded an academic degree of Master of Theology.