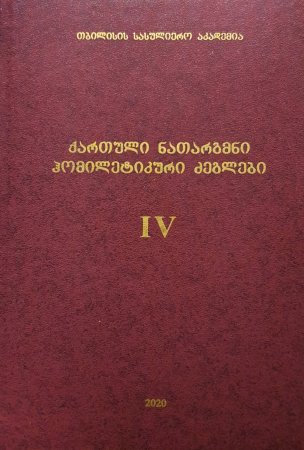 The present volume of the series “Homiletic Monuments Translated into Georgian” is dedicated to the old Georgian translations of Homilies on the Baptism of our Lord Jesus Christ. The publication includes both previously published homilies (edited and filled with corroboratory passages from other manuscripts), as well as - unpublished to this day ones. These homilies are the sermons delivered by Saint Nino and seven great Byzantine Church Fathers on the feast of the Baptism of our Lord Jesus Christ.


Most of them were translated into Georgian during the pre-Athonic period (up to the end of the 10th century) by anonymous translators and were collected in collections of homiletic-hagiographic texts of the 8th-9th centuries, called “Mravaltavi” (Books of multiple texts). Two of the sermons whose author is Saint Sophron of Jerusalem († 638) and are translated into Georgian by Eprem Mtsire (9th c) represent an exception. Among the texts on the Baptism, St. Nino’s († 338) homily is pseudo-epigraphic and is considered to be an anti-Arianic writing.

Julian of Tabis (the 5th century) is unknown in Christian Literature and the content of his homily is of anti-Monophysitic nature.

The author of two more homilies on the Baptism is Gregory of Nyssa († 394). The second of these two is a continuation of the first one, and is to be pronounced the following week after the feast of the Baptism of the Lord.

In the homiletic literature translated into Georgian, there are seven more homilies on the Baptism known as those of John Chrysostom († 407). Of these seven, the Greek source of only one text is identified for certain (PG 50, col. 805-808). Therefore, today the rest of them are considered as Georgian versions.

The first text, which is included in the Mravaltavi, represents a pre-Athonic translation, while the second one is taken from the Russian Prologue-Synaxis (17th century), presumably by the Georgian royal, King Archil (1647-1713). In the Prologue-Sinaxis, which is translated from Russian, there can be found another homily known as the one belonging to Proclus: its Greek source is unknown.

It should be noted that compared to the Greek text, in the Georgian versions six passages have been added, which indicates the existence of an extensive edition of the Greek text.
Due to the large volume of the material, we were not able to include in this volume the homilies by Saint Gregory of Nazianzus which are translated into Georgian by three translators (Saint Euthymius the Athonite, Ephrem Mtsire and David of Tbeti). The following edition of the series will be dedicated to this material.