Awarding the Title of Honorary Doctor 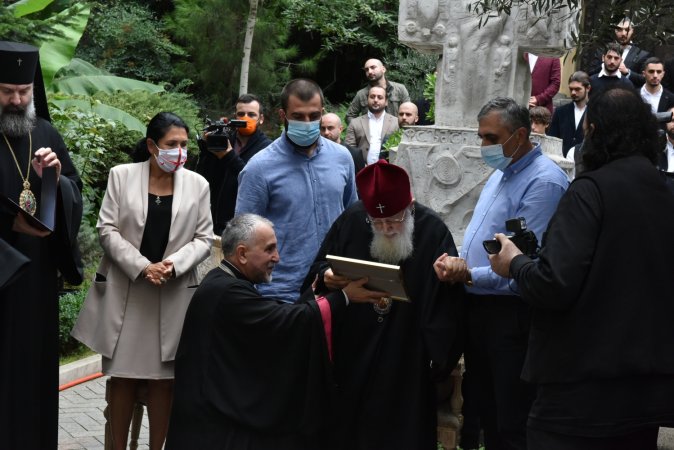 On October 5, 2020, in the courtyard of the Patriarchate of Georgia, an event dedicated to the awarding of the title of the Honorary Doctor of Tbilisi Theological Academy and Seminary to His Holiness and Beatitude, Ilia II, Catholicos-Patriarch of All Georgia, Archbishop of Mtskheta and Tbilisi and Metropolitan of Tskhum-Abkhazeti, was held.

The opening speech was given by the Rector of Tbilisi Theological Academy and Seminary, Protopresbyter Giorgi Zviadadze. He noted that the contribution of the Catholicos-Patriarch of All Georgia to the Orthodox Church of Georgia and to this country bears epochal significance.
The Protopresbyter recalled that the Catholicos-Patriarch of All Georgia, Ilia II, from the very day of his enthronement, had set a goal to obtain a verification of the recognition and acknowledgement of the Georgian Orthodox Church, which would be a confirmation of her ancient autocephaly. He was also the person who founded Tbilisi Theological Academy as a higher school of theology. Without this school, it would be beyond any possibility to revive and develop the science of theology in Georgia. The Patriarch of Georgia himself was the Rector of this educational institution for several years. The Protopresbyter noted that owing to the highest authority of the Patriarch, a Dissertation Council for Orthodox Theology was established at Tbilisi Theological Academy and Seminary, an unprecedented event in the history of Georgia. With the blessing of the Patriarch, the above-mentioned institution signed an agreement on scientific cooperation with various leading higher educational institutions of the world. By awarding the title of Honorary Doctor, Tbilisi Theological Academy and Seminary expresses its deepest gratitude and deference to the Catholicos-Patriarch of Georgia for his meritorious service.

At the conclusion of his speech, Protopresbyter Giorgi Zviadadze introduced the text of the honorary doctorate diploma, which was developed by the Scientific Council of the school:

“Tbilisi Theological Academy and Seminary of the Apostolic Autocephalous Orthodox Church of Georgia awards His Holiness and Beatitude Ilia II, Catholicos-Patriarch of All Georgia, Archbishop of Mtskheta and Tbilisi, Metropolitan of Bichvinta and Tskhum-Abkhazeti,  the title of Honorary Doctorate (Doctor Honoris Causa) for his outstanding contribution to the worldwide recognition of the autocephaly of the Orthodox Church of Georgia, revival of the Church, development of theological education and sciences, establishment of the higher theological school – Tbilisi Theological Academy, spiritual strengthening and unification of the Georgian nation.”

Further, Protopresbyter Giorgi Zviadadze handed over the diploma and scroll to the Patriarch, where the above-mentioned text is placed in the Georgian and the English languages.

The Catholicos-Patriarch of All Georgia was addressed in the speeches given by the President of Georgia, Mrs. Salome Zurabishvili, the Speaker of the Parliament of Georgia, Mr. Archil Talakvadze, Locum Tenens of the Patriarchal Throne, His Eminence Shio, the President of the Georgian National Academy of Sciences, Mr. Giorgi Kvesitadze, the President of the National Academy of Sciences of Georgia, Mr. Giorgi Kvesitadze and the Ambassador of the Vatican to Georgia, Monsignor Jose Betencourt. They spoke about the special merits of the Catholicos-Patriarch of All Georgia, thanked him for his indefatigable work for the Church of Georgia and the nation, and congratulated him on being awarded the title of Honorary Doctor of the Academy and Seminary.

The President of Georgia, Mrs. Salome Zurabishvili, noted that owing to the Patriarch, many churches and monasteries have been built and revived in this country, religious education has become available to all and educational institutions of various profiles have been established. Mrs. Salome Zurabishvili addressed the Patriarch with the following words: “I consider you to be the greatest person of our epoch and for me it is an honor to be President of Georgia in the time of your tenure.”

Mr. Archil Talakvadze said that His Holiness’s merit before our nation and our homeland is outstanding and invaluable. The Patriarch of Georgia, with his life, work and steadfastness of his faith, sets for everyone an example of how to accept contemporary challenges. The Speaker of the Parliament noted that under the leadership of the Patriarch, Tbilisi Theological Academy and Seminary is engaged in the most important literary activities and imparts knowledge to young people, and by this contribution, strengthens the identity and historical memory of the Georgian nation.

In his opening remarks, Metropolitan Shio said: “Today, of course, we reflect on the great work you have been doing for decades in the direction of the advancement of science and education.” His Eminence Shio said that through the efforts of His Holiness, the intelligentsia of this country started to construct their contacts with the Church, high-level educational centers were established within the bosom of the Church, and many people, working in various scientific fields, continued their activities among clergymen.
His Eminence noted that with the establishment of Tbilisi Theological Academy by the Catholicos-Patriarch of All Georgia, educational traditions were revived in the Orthodox Church of Georgia. These traditions were related to the existence of scientific centers, before the abolition of autocephaly in our country. Further, His Eminence Shio briefly reviewed His Holiness’s contribution to the revival of theological education in Georgia.

Mr. Giorgi Kvesitadze addressed His Holiness and Beatitude with the following words: “Your Holiness, undoubtedly, this day is a pleasant one for you, but it is much happier for the academy which is electing you as an honorary doctor.” Mr. Giorgi Kvesitadze noted that the development of science in Georgia has always been connected with the bosom of the Church and even today the Theological Academy successfully performs its function, with the blessing of His Holiness and Beatitude.

The Ambassador of the Vatican to Georgia, Monsignor Jose Betencourt, conveyed greetings from His Holiness the Pope to the Patriarch of Georgia and said that the representatives of the diplomatic corps accredited in Georgia have the greatest respect toward him, His Holiness and Beatitude has their friendship and support. He noted that, for a long time, he has been following and appreciating the Patriarch’s special guidance and care for the Georgian Orthodox Church and people. And, with the title of Honorary Doctor, Tbilisi Theological Academy acknowledges the particular merit of the Patriarch of Georgia and confirms respect for his personality.

At the conclusion of the event, the Catholicos-Patriarch of All Georgia addressed the audience: “All my life, I have served the Church of Georgia. I express my gratitude to the Lord that He entrusted me with this mission. The major objective of my work, of my spiritual activity was the integrity of the Georgian nation, integrity of our state. The unity of science and spirituality – this is the main objective; in this unity shall our nation find its strength. I am grateful to all of you for awarding this title to me. May God bless you, God is with us!”