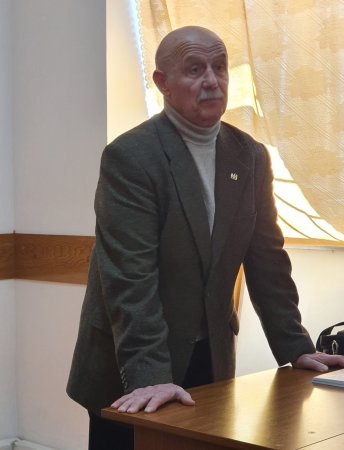 On February 28, at Tbilisi Theological Academy and Seminary a public lecture, titled “Power and Those Born by Revolution” was held. It was delivered by the member of the Napoleonic International Society, PhD in History, Professor Ivane Menteshashvili.

Protopresbyter Giorgi Zviadadze expressed his deep respect toward Mr. Ivane. He noticed that the scientist is a recognized investigator, a writer of a high professional level and a translator. Mr. Ivane Menteshashvili is always ready to give help to the Patriarchate of Georgia and to the Theological Academy in the activity within his competence.

The professor spoke about his book, titled “Power and Those Born by Revolution”. The book gives a description of premises for the rise of great historical figures who emerged in the storms of revolution – Oliver Cromwell, Napoleon Buonaparte and Joseph Stalin. Mr. Ivane Menteshashvili considers that “the success of the aforementioned persons and their coming to power were preconditioned not only by their personal characteristic features but rather objective social, political and ethnophsychological circumstances preconditioned an expression of these features in practice. The unity of precisely these premises determines historical epochs, which in the end, are unique and inevitable.”

Mr. Ivane emphasized the particular traits and roles of these persons through which they shaped the world history. All of them defended the interests of their states - England, France and Russia - and fought for them. He marked out the most significant of the characteristic features of these men. Apart from his peculiarities as of a revolutionary, Cromwell was a man of deep faith (he was an unswerving Puritan, which is the most radical confession in Protestantism), had a good knowledge of the Bible, which helped him greatly in the unification and formation of his regiment, called “Ironsides”. His soldiers fought with great courage and conviction with their foes who were circles adhering to other religious confessions. Mr. Ivane mentioned that Cromwell promoted individuals according to their faith in the idea they were fighting for. He remembered the well-known battle of Dunbar when Cromwell started to sing his favourate Psalm 68 and his inspired troop sang with him.

Napoleon, as a talented and successful general, mused on how long he would fight for the benefit of an unpopular among the people government who solely sought their own ends. He was well aware of the objectives the French people aspired to achieve; these were their aspirations after antiquity, love for the Motherland and devotion to her, civil liberty. By accentuating these ideas, by striving and working for attaining them, he drew the attention of the political circles of France and the majority of the people, who remained loyal to him for a long time.

Mr. Ivane describes Stalin as a loyal follower of revolutionary ideas, which were related to not only the social freedom and consolidation of the rights of the oppressed working people, but also to an unsparing fight against the oppressors and dominant classes, their defeat and final destruction. Brought up in austere conditions and being a fighter, he developed a ruthless attitude to people, which was also bolstered by the ruthlessness of the forces, contending him (especially, of Lev Trotski) towards the opposed to them social classes and individuals who did not share their ideas. With all these peculiarities and their particular roles, with intensive struggle and activities, these persons put a significant mark on the history of the world, which cannot be looked over by any of the investigators of these periods…

Mr. Ivane Menteshashvili, with his zeal, profound knowledge of the issues and reference to very eloquent facts, impressed highly the auditorium, leaving them with multiple questions to think over… At the end of the lecture, the Rector of Tbilisi Theological Academy and Seminary asked the professor, how the faith in God and love for the singing of Psalms correlated with the conquests of Cromwell. According to Mr. Ivane Menteshashvili, Cromwell’s conquests and activities were grounded on his faith and, at the same time, on the intolerance toward his opponents, his negative attitude toward ethnically and politically different people (Irish and Scottish peoples). It was colonialism, which, in the aforementioned period, was veiled with religious ideology.