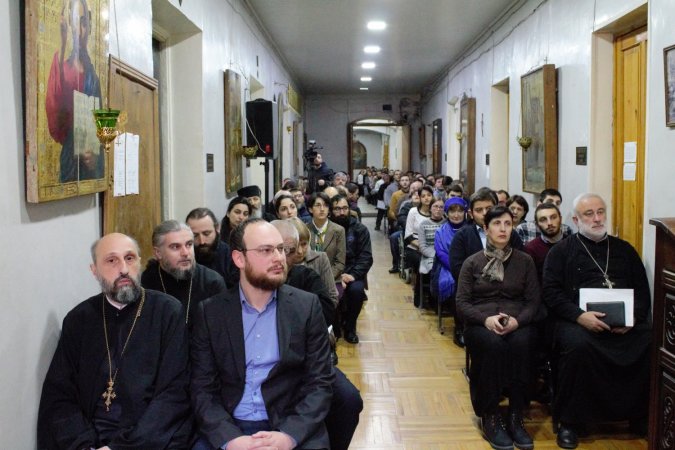 On the 23rd of December, a conference dedicated to the 42nd anniversary of the enthronement of the Catholicos-Patriarch of All Georgia, Archbishop of Mtskheta and Tbilisi and Metropolitan of Tskhum-Apkhazeti was held at Tbilisi Theological Academy and Seminary.


The Rector of Tbilisi Theological Academy and Seminary, PhD in Theology and Philology, Professor, Protopresbyter Giorgi Zviadadze gave the welcoming speech. He mentioned that the merit of the Catholicos-Patriarch of All Georgia before our Mother Church and our country is unfathomable; the authority of our Holy Patriarch is great and is acknowledged beyond Georgia. As Protopresbyter Giorgi Zviadadze emphasized, particularly noteworthy in his incumbency is the foundation of Tbilisi Theological Academy and Seminary since the existence of a theological institution in the country heralds the development of theological thought in it. On behalf of this educational institution, the Rector of Tbilisi Theological Academy and Seminary expressed their deepest deference towards the Holy Patriarch’s merit. Further, the floor was given to the Metropolitan of Manglisi and Tetritsqharo, PhD in Theology and History, Professor, His Eminence Anania (Japaridze).

Metropolitan Anania Japaridze gave a talk on the theme, titled: “The Early Years of the Incumbency of the Patriarch (1980-1990)”. He particularly highlighted the fact that Tbilisi Theological Academy and Seminary was founded by the efforts and prayers of the Catholicos-Patriarch of All Georgia Ilia II. This higher educational institution is now a school of particularly advanced level. For this achievement, His Eminence thanked the Rector of the institution, Protopresbyter Giorgi Zviadadze. Metropolitan Anania gave a survey of the circumstances in the Church and the policy of the Georgia of the 70s, the first difficulties which the Catholicos-Patriarch Ilia II had to face and drew a parallel between that period and the contemporary situation. As his Eminence said, the Catholicos-Patriarch of All Georgia exhibited dignity and honour while going through all those trials, which he had to encounter on his way from the very day of his enthronement, and he restored the Georgian Apostolic Church. Metropolitan Anania mentioned that the fact that the Holy Patriarch is the shepherd of the Mother Church of Georgia is the proof of the abundance of God’s grace and the mercy of the All Holy Mother of God upon Georgia.

The following speech was given by the Rector of Saint Andrew the Apostle Georgian University, Head of the Department of History in TTAS, PhD in Theology and History, Professor, Mr. Sergo Vardosanidze. The topic of his speech: “The Catholicos-Patriarch of All Georgia Ilia II and the centuries-old world”. Mr. Sergo Vardosanidze mentioned that His Holiness’ merit has many dimensions, however, in his talk he would only expound on one of them. He remembered the year 1917, the day of the restoration of the autocephaly to the Church of Georgia. On this day, His Holiness, the Patriarch Kirion II addressed not only the Patriarchs of the Eastern Orthodox Churches but also the Pope of Rome and the Catholicos-Patriarch of All Armenians with an extraordinary letter in which he wrote that this fact could be considered as the continuation of the path of Primates of the Church of Georgia. Being a defender of Orthodoxy, the Patriarch Kirion was tolerant towards the other religious confessions practiced in Georgia. The Rector of St Andrew the First-Called University said that from the year 1921, under the Bolshevik government Georgia disappeared from the world geopolitical map. Therefore, the merit of His Holiness Ilia II Catholicos-Patriarch of All Georgia in the recognition of the independence of the Mother Church on the international level is profoundly evident. Mr. Sergo Vardosanidze mentioned that if in the years 1943-1977 the Primates of only a few of Orthodox Churches visited Georgia, in the years 1978-1987, those of every Orthodox Church came here. In the wake of all this, in 1990, the autocephaly of the Orthodox Church of Georgia was recognized by the Ecumenical Church. Mr. Sergo Vardosanidze also touched the theme of the relationships of the Primate of the Church of Georgia with the religious and political leaders of non-Orthodox states of the world who are disposed to the Catholicos-Patriarch of All Georgia with special respect. The primary result of the mentioned relationships is the fact that the world knows Georgia as the state of unique history and her Autocephalous Church.

The Director of the Publishing House of Tbilisi Theological Academy and Seminary, PhD of Philology, Professor Nino Melikishvili gave a talk, titled: “The Catholicos-Patriarch of Georgia Ilia II and the Problems of the Contemporary World”. The speech was mainly concentrated on the instructions given by His Holiness and Beatitude to his community throughout many decades, which were not fulfilled; this disobedience caused us to face an impasse, which the Spiritual Father of our Nation himself offers how to resolve. Mrs. Nino expressed her wish that “maybe in such hopeless situation as we have stuck ourselves in, we will hearken his word” since the way to resolve the problems we have been facing “is only one - to revive in our lives the values which our Patriarch so often reminds us about”.

The speaker mentioned that the most primary problem we are facing today is the restoration of the integrity of the county to which our Patriarch has dedicated so much of his life.  He has always called for peace and made efforts in “holding the tension between the Georgian and the Osetians off the critical margin…”peace” – this is the formulation of the desirable relationships between us and the Apkhzians and Osetians, laid by His holiness. This of course, he considers as the result of the existence of these inseparable parts of Georgia within her borders.” Mrs. Nino Melikishvili also touched another theme of His Holiness and Beatitude’s concern – his call to the young people, who are working abroad in order to provide themselves with sustenance, to return to their motherland. The Patriarch is pointing out that “while remaining in foreign countries they are placing at stake their liability to remain without their native country”, the aftermath of which is always deplorable: “becoming oblivious of their own history and culture, values, mother tongue.” The Patriarch admonishes the young people that they are to prepare themselves for inheriting the duties of the older generation, to start thinking about what they can give to their motherland instead of thinking what the motherland can give them. The overindulgence in material well-being causes an unfair distribution of the material wealth and spiritual degradation. A human being’s last provisions he takes with himself is goodness and the good deeds he has done throughout his life. Here, in this world remains his good name, which he will be remembered with.

“The most severe ordeal loomed before the Georgian people when a certain part of them started to inculcate in people unbelief and crowned this evil ambition with attacks on the Church” – she mentioned, and continued her talk with the Patriarch’s approaches to this issue. “While speaking about this subject, the Patriarch again shows his magnanimousness which is his inherent characteristic feature. He speaks about the hard times, various slogans and addresses, which confound a human being. That is why, His Holiness tries to elucidate to the people that while blaspheming the Church, they become weapons in the hand of the dark, evil and unclean spirits”. Also, His Holiness considers the expression of fidelity toward the Church with the help of gathering at street meetings is a wrong action for he acknowledges prayer as the only way for solving all problems and calls his parish toward it.

The speaker ended her talk with the words of His Holiness and Beatitude Ilia II:”I often think about the force, which saved Georgia. Our nation was saved by the profound spiritual strength, steadfast faith, and national awareness …- two forces – spiritual and national – will save the Georgian nation, we must maintain them, we must preserve them. We are to bring up our children with the same inspiration… for 2000 years, we, Georgians have confessed Christianity, and we should remember that what the Lord will forgive others He will not forgive us, since he has endowed us with abundance of His grace. And whoever the Lord bestows with His grace, of him much will be required.”

Lastly, the Rector of Tbilisi Theological Academy and Seminary, Protopresbyter Giorgi Zviadadze once again emphasized the contribution of His Holiness and Beatitude Ilia II, Catholicos-Patriarch of All Georgia to the Country and thanked the speakers and the attending people.

P.S. Not long ago, Metropolitan of Manglisi and Tetrotskharo, Professor of Tbilisi Theological Academy and Seminary Anania Japaridze celebrated his 70th birthday. The Rector of the educational institution congratulated him on his jubilee and presented a Pangaea with an image of the Mother of God to him.