A Meeting at the University Millennium 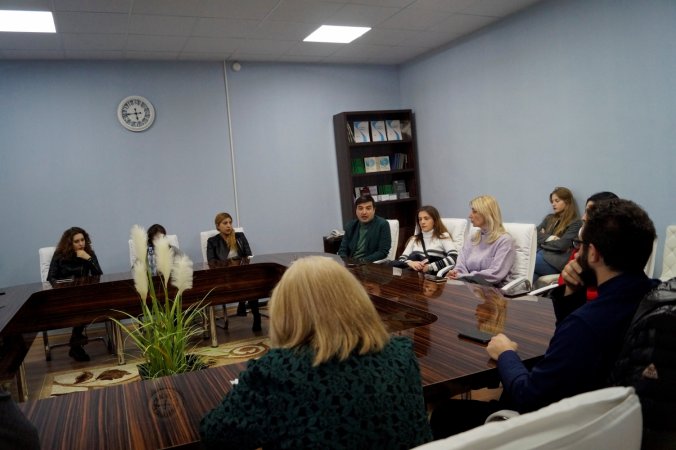 Within the framework of the programme “Friendship between the Higher Educational Institutions of Georgia and Raising and Encouragement of the students’ Academic Potentiality”, on the 20th of December, the Doctoral students of Tbilisi Theological Academy and Seminary met with the staff and students of the University Millennium. The meeting was dedicated to a discussion on theological issues.

At the aforementioned meeting, the following Doctoral students of Tbilisi Theological Academy and Seminary gave their speeches:

The title of the topic: “Precedent law of Divorce in the Georgian Reality and the Principle of the Application of God’s Economy”

The speech represents part of the dissertation thesis of the Doctoral student (academic supervisors: PhD of Theology, Archpriest Alexi Kshutashvili and PhD of Theology, Professor Giorgi Andriadze). The paper represents an exposition of the history of the ecclesiastical law on divorce, causes of divorce and the principle of the application of God’s Economy in similar issues.

In the books of Ecclesiastical Law, among them in the Great Canon Law, also in the laws issued by emperors and other juridical books one can observe certain reasons according to which divorce was allowed. Even it is evidenced in the Holy Scriptures that divorce is allowed in case of adultery and fornication. The Saviour says: “…whoever divorces his wife for any reason except sexual immorality causes her to commit adultery…”(Matthew 5.32), based on which the Church formulated many laws on a second and a third matrimony, besides, on the acceptance of a person in the bosom of the Church with the fourth matrimony. The study of the sources and its history reveals that the reason for the existence of so many laws was the inevitability of divorce. Another reason was the fact that ecclesiastical law and a law issued by an emperor often worked as laws of the same authority by virtue of the fact that the Church represented the state religion. Accordingly, the registration of church matrimony had legal validity, and due to it, the law of divorce required certain norms, which were formulated throughout long periods.

The study of the juridical provisions of the Church, which are represented in the mentioned chapter, clearly elucidate that in relation with the already existing norms, the Church used principle of economy and allowed the couple to get married anew.

The title of the topic: “Liturgics and the Mystery of Eucharist”

The author explains the essence of Liturgics as a science, its subject, objectives and auxiliary disciplines. He speaks about the nature of Christian ministry and its characteristic features. The special place of the Holy Liturgy and its extraordinarity among all the ministries to God is mentioned and theological aspects of the Eucharistic mystery is delineated: The Eucharist – Mystery of mysteries, the Eucharist and the Church, the Eucharist and a human being’s incarnation, the Eucharist is the holy offering and the Eucharist – a revelation of the Christian Teaching.

The title of the topic: “Great Lent”

The author expounds on the formation and development of Great Lent, or “the Holy Forty Days”, its spiritual significance in the dimension of the divine providence of human beings’ salvation. In addition, the characteristic features of Great Lent are described.

The title of the topic: “The Ascetic Monument, titled: “’On the Accountability for Passions’” and its Translation by Euthymius the Athonite”

The speech represents part of the Doctoral student’s paper (the academic supervisor: PhD of Philological Sciences and Theology, Professor Edisher Chelidze). The ascetic monument “On the Accountability for Passions” is directed against eight evil thoughts. These are: gluttony, fornication, covetousness, hopelessness, anger, listlessness, vainglory and pride. The work consists of eight chapters, each of which gives a short explanation of each vice. This is followed by citations from the Holy Scripture on respective thoughts. The existence of the aforementioned monument is not verified by Greek sources. As it has been confirmed, the work represents an ascetic textbook comprising selected teachings from Evagrius Ponticus’ (the 4th century) well-known writings (Ἀντιρρητικός) and “Treatise on Eight Evil Thoughts” (De octo spiritibus malitiae).