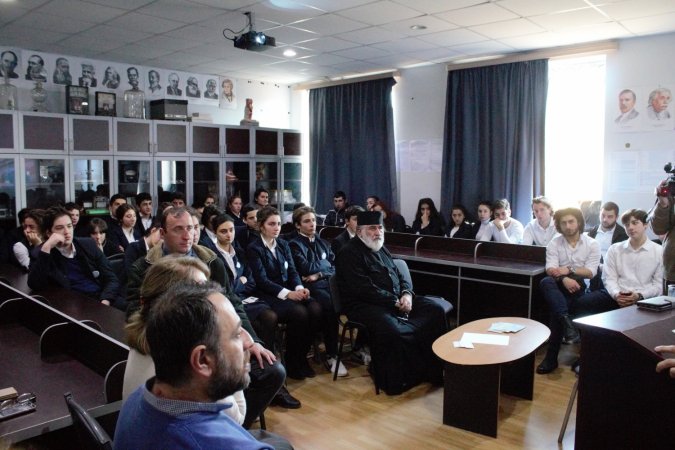 On December 17, the members of the staff of Tbilisi Theological Academy and Seminary visited Tbilisi Saint Queen Tamar Boarding School. The Principal of the school, Archpriest Mirian Samkharadze, its academic personnel and administration received the guests with special attention and warmth. They introduced them with the infrastructure of the school and some of the details. While speaking to the 10th, 11th and 12 grade students, Archpriest Mirian Samkharadze emphasized the particular role of Tbilisi Theological Academy and Seminary in the inculcation and promulgation of Christian faith, values, and theological education. According to him, TTAS is the bosom of the Church where special warmth and love prevail.

Archpriest Nicholas Sulukhia, Assistant of the Dean of the Faculty of Architecture, Iconography and the Restoration of Easel and Monumental Iconography spoke about the importance of the study of theology and TTAS itself. He emphasized the particular significance of TTAS and its main objective. Mr. Tsotne Chkheidze, Deputy Head of the Public Relations Office, elucidated to the students the spiritual and intellectual relationship of Tbilisi Theological Academy and Seminary with the churches and monasteries, which functioned in Georgia and beyond her throughout centuries. He introduced to them a brief history of TTAS, spoke about the merit and contribution of His Holiness and Beatitude, Catholicos-Patriarch of All Georgia Ilia II in the foundation of this institution. The Deans of the Faculties of Christian Psychology and Christian Art, Mr.G rigol Khachapuridze and Mrs. Tea Bezhuashvili spoke to the audience about the unique aspect of the work of these faculties. Mrs. Tea Bezhuashvili mentioned that within the framework of Christian Art Theory and History, lectures at the National Museum, Institute of Manuscripts and  G. Chubinashvili National Research Centre of Georgian Art History and Preservation of Monuments are considered. Mr. Grigol Khachapuridze spoke about the value of a good psychologist and the role of theology in the formation of a psychologist of high qualification. Lastly, Archpriest Nicholas Skhulukhia familiarized the audience with the educational programme of Ecclesiastical Architecture, Iconography, Easel and Monumental Iconography. A display of unique works of art, executed by the students of these faculties was received with great approval.