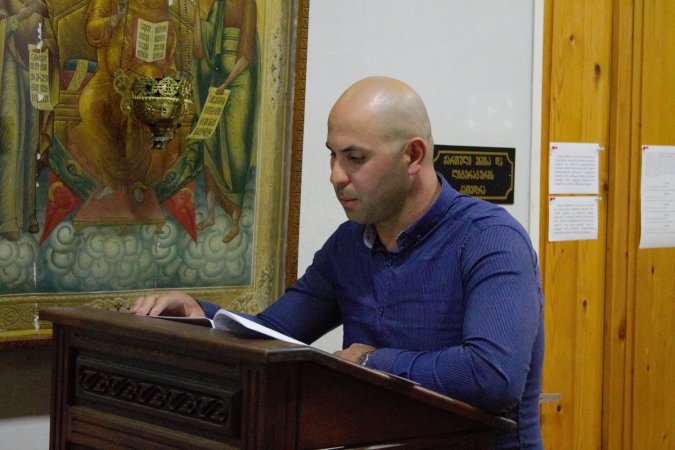 On the 7th of November 2019, Thursday, the third year student of the Theological Academy Gagi Ghavtadze gave a talk, titled “Interpretation of One Episode from the Lives of the Holy Apostles Peter and Paul According to the Epistle to the Galatians” (the supervisor of the research – Master of Theology Giorgi Todua).
According to the Epistle to the Galatians, when the Holy Apostle Peter came to Antioch of Syria, he broke bread and ate with the newly converted to Christianity pagans; however, he started to stay aloof from them when he encountered Christian Jews who had arrived from Jerusalem. In this connection, the Holy Apostle Paul publicly reprimanded the Apostle Peter and exhorted him to not hinder the newly converted pagans by his action.
Within the framework of Mr. Gagi Ghavtadze’s report, precisely this historical fact is analyzed and evaluated as based on the Holy Fathers’ writings. The author refers to some of the European theologians who share the opinion that there was a dissention of some extent between Peter and Paul; he does not agree to this opinion and proves the correctness of his position by referring also to the other opinions of Holy Fathers. These Holy Fathers (Saint John Chrysostom, Blessed Theophylact of Ohrid, Blessed Jeronimus…) appraise the actions of the Apostles as reasonable conduct for their purpose was defense of the newly converted Christians without hindrance. The speaker noted that if we consider that the Apostle Paul publicly reprimanded the Apostle Peter, his following words remain inconceivable: “And unto the Jews I became as a Jew, that I might gain the Jews; to them that are under the law, as under the law, that I might gain them that are under the law?” (1 Corinthians 9.20).
According to Mr. Gagi Ghavtadze, there was no dissention between the Apostles. The motivation for their actions was their deep love for the newly converted Christians and special care for them which was indispensable to show to the former pagans and Judeans since they were spiritually weak people at that time.